Such a relief for Fahad Mustafa fans aka Fahadians as one of the biggest names of Pakistani cinema and TV has finally decided to say goodbye to the brands such as Harpic and others. The Jeeto Pakistan host now has all the reasons to pick and choose brands for commercials, which is why he is currently being seen in promoting brands like Clear and Spirit.

Fahad Mustafa in undoubtedly one of the biggest names of Pakistani TV and films, which is the reason that he is playing lead in two of three movies coming out on this Eid ul Azha.

In Nabeel Qureshi’s Load Wedding, he is being paired with Mehwish Hayat for the second time. The duo earlier appeared in Actor in Law, which was the biggest blockbuster of year 2016.

He is also playing one of the leads in Jawani Phir Nahi Ani 2, which also stars Humayun Saeed, Kubra Khan, Ahmed Ali Butt and Vasay Chaudhry. Mustafa is being paired with the debutant Mawra Hocane in the film.

We wish more success and good luck for both films. 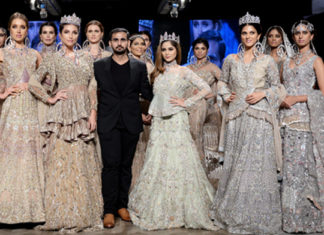