Ahad Raza Mir has his plate full these days, with the success of performance in Aangan, or playing the titular character on stage in Hamlet. In a conversation with The Gauntlet, the actor opened up about what it really means for him to be returning to theatre.

“It’s really nice because you leave one place and you think that place will forget you but they didn’t,” he said. “I was called back to play a lot of roles I wanted to take on but couldn’t, and the calls would keep coming. That means that I still have a home here. People think of me enough to go, ‘Hey, let’s give him a call and see if he wants to play a role. This time, for Hamlet, it worked,” he added.

Speaking of theatre, Mir seemed joyous at the thought of returning to it, as life in Pakistan can be somewhat frantic. “I wanted to return to the stage as I haven’t been on it in so long! I also just wanted a challenge and to be honest with you, when I’m in Pakistan, I’m just at my house because if I go outside it can be kind of hectic at times. While I love taking selfies and I love my fans, I just needed this break,” he stated.

Read: Ahad, Sajal to pair up for Farhat Ishtiaq’s next venture

The actor has his own twist on playing Hamlet, as their version steers towards the horror genre, and that’s what he feels makes it stand out. “The way I’m doing it is not so presentational but more humanised. It’s less about presenting and more about the actors feeling it. If they communicate properly, then the audience will get it,” he added, mentioning how his version has a desi touch to it.

Furthermore, the actor discussed how he indulged into theatre initially, in hopes that his experience would help the upcoming generation, and their parents. “My life changed completely when I made that call to my dad and said ‘I don’t want to do business’ and he just said, ‘Okay, good. Good for you.’ I just hope that parents become more supportive in that sense,” he said.

For all those struggling with achieving their dreams, Mir’s word of advice will surely help to some extent. “Your dreams are achievable; you just have to be smart about it. You shouldn’t listen to people when they tell you not to do something because if you feel it is what you’re meant for, then follow it,” he concluded. Admin - November 6, 2016
0
A premium international cosmeceutical brand titled REPAVAR was launched by ICI Pakistan Ltd. at a star-studded event in Karachi. The event was attended by... Shadab Khan gets into hot water after a girl alleged him... 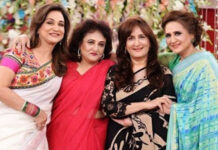