Aliza Sultan, Feroze Khan’s ex-wife, recently presented distressing evidence of domestic abuse she allegedly suffered at the hands of her husband, images of which made rounds on social media today, sending viewers and Khan’s celebrity fraternity alike into a frenzy. The images showed bruises on her arms, along with a medical report detailing the abuse, and where and when it happened.

As an aftermath, many celebrities have been extending their support to Aliza, calling out the horrors of domestic abuse, and urging others to speak up. One of the first actresses to share her support, Mariyam Nafees, took to her Twitter and Instagram to reshare an article with more details on the case. “I’m sorry people attacked you when you spoke your truth. I’m sorry that people knowingly stayed quiet. So sorry you had to go through this Aliza Sultan Khan. Stay strong, we’re with you! Allah is with you.”

With a photo of the hospital documents, Nafees asked “why do we raise voice only when they’re dead? Why do we blame them when they manage to escape?” Osman Khalid Butt soon followed suit and prayed for Aliza to get justice. “The MLO report Aliza presented as evidence states: ‘Blunt injuries on both arms, back, chest and face.’ I know we’re an incredibly desensitized society but read that again. Let it sink in,” he tweeted. He also took to his Instagram to further talk about the case, and the harrowing aftermath of women speaking up against abuse. “When a woman in this country is brave enough to break her silence and share the pain, suffering and humiliation she went through: The least you can do is show her empathy. It’s literally the bare minimum. (and judging by some of the comments underneath wherever her story has been shared, even that seems to be asking for too much),” he shared.

The MLO report Aliza presented as evidence states: ‘Blunt injuries on both arms, back, chest and face.’

I know we’re an incredibly desensitized society but read that again.
Let it sink in. Without naming the perpetrator, Mansha Pasha also shared her thoughts on the incident and extended her support to Aliza. “There is no excuse, no fandom, no friendship and no idolisation so important that it allows us to ignore violence and/or make excuses. Its time to put a stop to this! We won’t sit by and wait for more Noor Mukadam, more Sara Amirs just for the sake of not troubling the waters.”

She also urged the fraternity to speak up against domestic abuse, as no friendship or professional relationship is worth protecting abusers. “We need to speak up as and when we can when we see someone has suffered in this way regardless of who that person is — friendship, colleague, fandom shouldn’t matter. Only then can we honestly speak about all the other ills with sincerity as well cuz we spoke up too when it was closer to home!” she wrote. She also shared how difficult it is for women to come forward with their experiences of abuse, knowing how badly they’ll get ostracised for it. She stressed upon the need for Feroze Khan to get cancelled and shamed for his actions. “These celebrities with God-complexes because of their families and their influence, need to be cancelled, they need to be named and shamed. Say it with me, say his name, Feroze Khan needs to be cancelled and Aliza Sultan Khan needs to be brought to justice,” she wrote. Sarwat Gilani shared her thoughts with the hashtag #BanFerozKhan where she mentioned how the industry doesn’t need abusers in it, and how Khan’s toxic characters were a true reflection of his personality. “Don’t need liars and wife beaters to represent our industry! No wonder he played such kind of roles so well, came so naturally to him,” she wrote in an Instagram comment. Aiman and Minal Khan both reshared the news on their Instagram stories, terming it ‘sick’ and ‘disgusting’. Armeena Khan urged others to speak up for women, and not wait for a dead body to turn up due to ignorance. “If you truly stand for women, now is the time to speak up! Don’t bother when they’re dead,” she wrote. 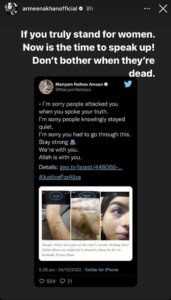 Anoushey Ashraf hoped for swift justice for Aliza, and brought up how awful it is for people to still question why she took her time in coming out with her story, and also urged people to read more about this. “It’s awful that people may still ask why it took you so much time to speak up. Little do they know how brave it is for you to speak up even now. As difficult as it is for us to speak up against someone we know personally, it’d be wrong for me to look the other way this time,” she wrote. READ: “All scripts we get are about couples fighting or having domestic issues,” Aagha Ali

Usman Mukhtar shared his disgust over the scenario and wished swift justice for Aliza. Singer Shae Gill also took to her Instagram demanding for Feroze to be in prison for his actions. “Feroze Khan should be in jail. Disgusting human being. Praying for Aliza and her family,” she wrote. Yasir Hussain earlier shared an Instagram post – a picture of him and his wife Iqra Aziz – and detailed his thoughts in the caption. “Alhamdulillah, I love my wife and kid a lot. If I raise my hand on my wife, there are 90% chances of my kid doing the same tomorrow. It is normal for couples to fight, but not normal for them to engage in physical violence like animals. I am extremely against domestic abuse. No matter if it’s done by a superstar or an ordinary person. I support Alizay and her family. May Allah ease her troubles soon. Ameen,” stated his caption in Urdu.

Saboor Aly also talked about how brave it is to speak up and walk out of an abusive relationship, and how divorced daughters are better than dead ones. “Walking out of a toxic relationship is a very brave step. We should all teach our daughters to have zero tolerance for any kind of physical and mental abuse and never succumb to the societal pressure of staying in abusive and toxic marriages. As they say divorced daughters and sisters are better than dead ones!” she wrote.

“All my prayers are for Aliza and everyone who were and are the victim of domestic abuse. Don’t stay quiet. Speak up and walk out,” she added. A lot of people had their eye on Feroze’s recent costars to speak up, and Ushna Shah, who is currently starring in Habs with the actor, finally shred her thoughts. “I’m still processing this and am in a state of shock. Nothing can and will justify violence against a woman. My heart is with Aliza as well as Sultan and Fatima,” she tweeted.

I am still processing this and am in a state of shock. Nothing can and will justify violence against a woman. My heart is with Alizah as well as Sultan, and Fatima.

The director of Habs, Musaddiq Malek, also shared a post requesting people to continue watching the show as it contained the efforts of so many other people and was quite clear about how his loyalties lied with Aliza, not Feroze. “A team of 40 people worked day and night for 100+ days to put up a show with literally blood and sweat, can’t let some ignorant, self-centered, egoistic man to ruin that for all of us. Please keep the art (Habs) separate from the artist i.e. (asshole) in this case,” he wrote, adding the hashtags #iwillspeak and #undercontract.

Feroze’s Habs costar Dania Enwer also shared how painful of an experience it was to work with the actor. “I never knew him before this project but while working, it was unpleasant, derogatory remarks on women in general were not easy to cope with. My last day of the shoot was the most painful to deal with. Strength to Aliza and the kids, to Aliza’s family. It’s not easy to bring your trauma in front of public,” she wrote. 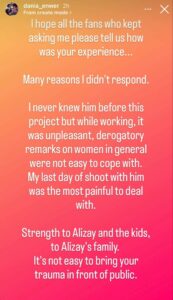 Ever since Aliza shared the news of her separation with the actor, many people also pointed out how the content being screened these days, especially the problematic characters being portrayed by Feroz, heavily influence the mindset of the people and the frequency of it ends up normalising it. It is a commendable step for so many actors to extend their support to the victim in this case, one can only hope it is not another trend for celebrities to follow, and that actual repercussions follow suit. Web Desk - July 12, 2021
0
Pakistan's one of the leading tv actors, Ayeza Khan expressed how much she admires Bollywood actor Madhuri Dixit. Taking to Instagram on the occasion of...