Hania Amir shared her stance on making content on taboo topics like infertility which will be featured in her upcoming comedy-drama film ‘Parde Mein Rehne Do’.

Wajah Rauf’s directorial ‘Parde Mein Rehne Do’ will feature Haina and Ali Rehman Khan in lead roles. The film revolves around a couple dealing with infertility.

“Look, there are many things that are taboo for the wrong reasons. If something is taboo, that doesn’t mean it’s wrong,” she said in an interview with Independent Urdu.

“We see films and TV series that only have a love story and songs. There’s nothing wrong with them. We enjoy those films as well. But, content like this should also exist, the kind that makes you feel like you learned something worthwhile,” she added.

Talking about expectations from her upcoming project, Hania said their aim is to let people talk about such a topic.

“Our aim is to start a conversation. We aren’t expecting people’s perceptions and ideas to change tomorrow. You can’t achieve something like that overnight. We want people to talk about it. Change comes afterwards,” she concluded.

It must be noted here that Parde Mein Rehne Do will hit Pakistani cinemas this Eid-ul-Fitr alongside four other much-awaited films. Arsalan Ali - April 5, 2017
0
Pakistani cinema has been going through a revival phase for last more than five years. A score of people have made their big screen debut... 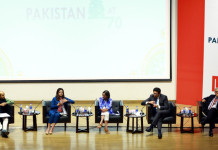