In a reaction video, Shagufta took a dig at current government for attacking PTI from going to Islamabad a day ago.

“What had happened in the country, shouldn’t be happening in an Islamic state like Pakistan,” she said. “The way government attacked PTI protestors that contains children, women and senior citizens, is condemnable,” she added.

The senior actor emphasized on freedom of speech and free demand of rights. “Being a nation, we deserve to choose our leader through fair elections. Government should allow people to demand their rights,” she concluded.

It must be noted here that PTI, under the leader of its chairman and former Pakistani PM Imran Khan, marched towards Islamabad but had to go back after current government launched operation against the protestors. Web Desk - August 21, 2021
0
Actor Feroze Khan is training hard in the ring for hours and hours to try his luck in the world of boxing in near... 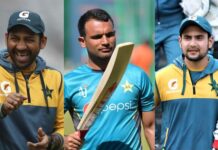