The LUX Style Awards office is proud to present Sarmad Khoosat as the shows’ official scriptwriter for the iconic LUX Style Awards 2019. A well-renowned name in Pakistani film and television, Sarmad is known for creating memorable dramas and films that resonate with Pakistani audiences. This year, he is taking his skills to #LSA2019 providing a fresh take, and a unique view to the script and show.

The multi-talented actor, director and scriptwriter, Sarmad is the talent behind successful dramas such as Humsafar and Shehr-e-Zaat to name a few. His claim to fame was in the 90s, when he wrote the hit sit-com Shashlik that ran for over three years on PTV. Not only this, but he also acted in shows such as Baaghi, Mujhe Jeenay Do, Main Manto and Dhokay Baaz.

In 2017, he was presented with the Pride of Performance award by the President of Pakistan, celebrating his work in the field of literature and performing arts. In 2018, he wrote a 24-hour live act, No Time To Act, enacting the last hours of a prisoners life. The performance granted him appreciation from critics and audiences alike. Now, with a plethora of experiences underneath his belt, his next venture is the LUX Style Awards where he is sure to entertain audiences with his diverse range of writing.

The 18th Annual LUX Style Awards will be recorded later this month and are slated to air on Geo Television. The show is directed by impresario par excellence Frieha Altaf. Indubitably, with Khoosat on the board, this year’s ceremony will have something new to offer in terms of wit and clever punchlines. And with someone as socially aware as him, one can expect him to draw the line when it comes to problematic comments. Fingers crossed for nothing but utmost excellence! 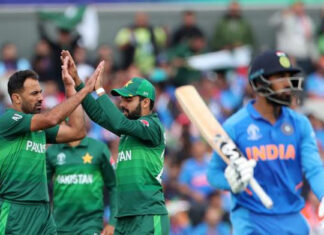 Web Desk - April 18, 2021
0
Pakistan cricket team is most likely to play all of their group stage matches in T20 World Cup at a single venue in India. After...