We have all seen celebrities hosting Ramadan transmissions this year, despite the Punjab Assembly banning them from hosting any Ramadan-related programs. Ahsan Khan is also hosting a religious transmission on HUM TV this month, and much like every other celebrity doing so, the actor has also faced some criticism.

In a conversation with HUM TV, the actor addressed the backlash, putting forward the idea that this judgement is not for anyone to make. Bringing up how he used to host a segment called ‘Hayya Al Falah’ which revolved around Islamic trivia, the actor felt the need for more Islamic education all around, including for him.

“It was that 30-minute experience daily in Ramazan that made me realize that we have a lot to learn about religion. When I was approached by Maimoona Siddiqui at Hum TV to do a full-fledged transmission, I did not hesitate as I was utilizing my Ramazan for a good cause,” he said.

He also went on to add how he takes a particular interest in Islamic Studies as a subject, and that his show helps him and everyone else clarify their beliefs about the religion.

“The more I get to know about it from those who teach it, the better. Like every household, my family discusses Islamic issues, consult scholars and meet them to get answers to many questions. These programs help those audiences who don’t have access to renowned scholars so that they get the clarity about religion in this Holy month,” he said.

And as for the constant criticism, the actor elucidated that him hosting such transmissions does not mean he is passing off a religious scholar or preaching sermons. Because at the end of the day, he is just one of the messengers in a show which provides so much more than just religious content.

“I play the role of a bridge here between the audience and the scholars and ask questions that the audience might be interested in because I am part of them as well. Nobody has the right to judge me and if some people think that I am not a good Muslim because I am an actor, then I ask them who gives them the right to assume such a thing,” he said.

“We need to change this mindset and promote harmony among people from all walks of life, just like we preach harmony between all sects of Islam,” he added. 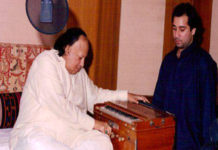