Feroze Khan said people spread rumors regarding him being in a relationship with Hania Amir for cheap publicity.

Speaking to Something Haute, Khan said he was guilty to even face Hania after such rumors took rounds on social media. “It was really disturbing for both of us, to be honest. Hania messaged me saying ‘what is this, why am I being dragged into all of this’ and literally I was embarrassed,” he said.

“I will not make comment on Hania-Asim controversy as this is not in my domain to talk about it. But some senior journalists spread rumors about us for Rs 2 publicity, talking rubbish about ‘evidence’ of what happens on sets, etc,’ he bashed.

Read: ‘I will use my fame to educate, guide people towards right path’ Feroze Khan

To a query about rumors of getting separated from his wife Alizey Fatima, Khan said he has always kept his life private and doesn’t want to discuss it. “I don’t know why people are spreading such news without any confirmation. I have always kept my life personal, if I don’t want to talk about this then why such things are coming out?” he asked.

“To be very frank, I have hired a team now who is handling such issues. It will take just two minutes and the CyberCrime wing will pick you up from your home for spreading false information,” he warned.

It must be noted here that rumors went all the way on social media about Feroze got separated from his wife and had a relationship with his co-star Hania. 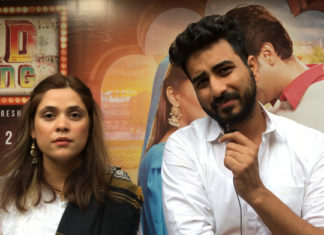 Hermain Fatima - August 3, 2018
0
This Eid ul Azha will bring us the trio of super entertaining movies as seen in the trailers. Load Wedding, Parwaaz Hai Junoon, and...