It’s that time of the year again when PSL frenzy has taken over the nation, even more so than before. And with every minor update, the influx of memes is expected. Having said that, the PSL V trophy just got unveiled today and boy, do people have a lot to say or what?

Intezar ka waqt khatam hua! Here is your first look at the #HBLPSLV trophy! What do you think? #TayyarHo? pic.twitter.com/FY6rP9SOQJ

Soon after the grand reveal, reactions started pouring all over social media. And to save you the trouble of looking for them, we’ve compiled some of the best memes for your viewing pleasure. Rest assured, you won’t be disappointed!

READ: ‘Excited’ doesn’t do justice to what I’m feeling,’ Asim Azhar about PSL

For some, the excitement began way before the trophy was unveiled.

PSL ki chaand raat is TODAY. The trophy will be unveiled AND I CANNOT CONTAIN MY EXCITEMENT 🤪🤪🥳🥳 pic.twitter.com/j8hY6oASmS

Me when I heard PSL trophy will be going to unveil today ! Really excited ! pic.twitter.com/gzBWQWwgMp

And once it was revealed, it was definitely a sight for many sore eyes.

PSL is better than other leagues in many ways but having the best trophies is number one!! pic.twitter.com/5t0dJY6iQC

And soon after, city wars incoming!

What do you say LQ Fans? #PSLV #PSL2020 #LahoreQalandars pic.twitter.com/vDQ8sDCQyp

This is the only time when u see Lahore Qalandar so close to PSL trophy #PSL5 #PSLV #PSL2020 https://t.co/sscaMSYMtQ

Some even fit the trophy into some hilarious meme formats.

You vs the guy she told you not to worry about pic.twitter.com/qqiyDnEsch

Needless to say, PSL fans definitely deserve a lot of credit for keeping the spirit alive every year and supporting the teams in a wholesome manner. Here’s hoping it all remains an enjoyable experience for all. Web Desk - May 6, 2021
0
Adnan Sami backed his son Azaan Sami for his upcoming music video 'Tu' with one of the leading Pakistani actors, Mahira Khan. Taking to Instagram,... 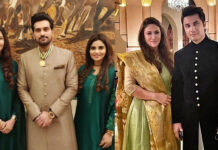