Taking to Instagram, Dunk shared that so many people from Pakistan are tagging him into ARY Digital’s posts featuring their new drama named ‘Dunk’ similar to his second name. “I’ve been getting tagged in this a bit today, surely the actor needs a fresh haircut,” he wrote. It must be noted here that Dunk has represented Karachi Kings and Lahore Qalandars in PSL. He became so famous in the country after a couple of power-packed innings while representing Qalandars in this year’s PSL. He was also named ‘Bubble Gum Man’ for his appearance in the ground with chewing bubble gum and hitting sixes.

Read: Old Afridi shows glimpses of his young age with 50 off 20 balls ‘Allah is with the patient’ Hafeez reacts to exclusion from T20I...

Web Desk - January 31, 2021
0
Veteran cricketer Mohammad Hafeez reacted to his exclusion from the national T20I squad against South Africa despite being the highest run-scorer in the shorter... 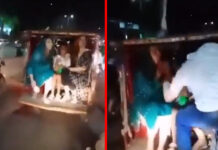