Celebrities took a stand for five-years-old Marwah who was kidnapped, raped, and murdered in Karachi’s area of Essa Nagri.

Where the entire nation united for getting justice for Marwah, there were celebrities who also came forward to speak against this brutality.

Asim Azhar also reacted to the incident on Twitter and asked: “How many more angels like Marwah till we wake up?”

Veena Malik requested authorities to look into this matter seriously and take strict action against the culprits.

Pedophiles must be hung in front of people. It’d be the best prerequisite for stopping this sort of obscenities. Authorities are requested to take notice seriously. We’ve lost patience. We don’t want these blooming roses to be plucked.💔
⁦#JusticeForMarwah

Yasir Hussain expressed disappointment over the incident and ask those people, who often troll him on social media, to come forward and raise voice for Marwah.

Ushna Shah urged authorities to implement a public and Inhumane punishment to the culprits to set an example for others.

Every inch of investigative & forensic resource needs to be used to identify the monsters. This time a hanging wont do! There needs to be a PUBLIC & INHUMANE punishment; they are NOT HUMANS. We live amidst demons. Set an example for the rest! #JusticeForMarwah #torturerapists

Hadiqa Kiani said people should stand up and protect their children. It must be noted here that little Marwah’s body was found burnt in the trash. According to the reports, the five-year-old kid was raped and the cause of death was blunt force trauma to the head before her body was torched in the garbage.

Read: ‘Don’t link me with Ertugrul every time’ Yasir hits back at Anoushey Mashal Asad - December 15, 2018
0
It wouldn’t be an exaggeration to say that Aangan is making people lose sleep with all the anticipation. But one of the leads in...

Ushna Shah under fire for passing off demeaning remarks to pizza...

Sana Mir writes a ‘disheartening’ letter to step down from all... 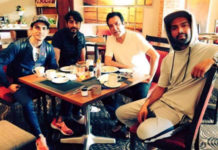