Adnan Siddiqui new drama serial titled Ghughi is currently making waves over social media for multiple reasons. It is a period drama, based in the time of partition and involves Hindi and Muslim families. The promos are interesting enough to make the audiences excited about the drama. And, on a lighter note, a picture of Siddiqui wearing the Lungi, a traditional dress which is worn around the waist.

“I was in no mode of making it viral, in fact, I requested my director to keep the scene small but the picture got leaked,” tells Siddiqui in an interview with Behtareen.pk. “Forgive me if you are feeling bad about it, and if you like it, keep watching” he adds with a laugh.

Siddiqui seems a very busy man in the field but his body looks completely in shape in the viral picture. We ask him the reason behind his fitness. “Whatever I do, I do it at home, and I don’t like big bodies. I do push ups, pull-ups and cycling, all at home,” he revealed. Drama serial Ghughi is produced by Adnan Siddiqui’s Cereal Entertainment for TVOne. It stars new talent Amar Khan in the lead role with Siddiqui himself and another new name Hamza Firdous. The story of the drama is dedicated to all the doves that were destroyed in the wars during the partition and the catastrophe seen over the years. It shows the cruel exploitation and abuse of women in the post partition era.

Ghughi on-airs on every Thursday night at 08:00pm only on TV One. Web Desk - May 27, 2022
0
Veteran Pakistani actor Shagufta Ejaz shared her two cents on the ongoing political unrest across the country. In a reaction video, Shagufta took a dig... 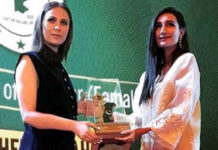