Federal Minister for Information and Technology, Chaudhry Fawad Hussain has called for an apology from female model and designer for bareheaded brand shoot in the premises of Gurdwara Sri Darbar Sahib at Kartarpur Sahib.

While reacting to this matter raised by the Pakistani Sikh Community, Fawad asked for an apology from the responsible.

“The Designer and the model must apologize to Sikh Community. Kartar Pur Sahib is a religious symbol and not a Film set,” he wrote.

The Designer and the model must apologise to Sikh Community #KartarPurSahib is a religious symbol and not a Film set….. https://t.co/JTkOyveXvn

Few social activists from the Pakistani Sikh Community shared pictures of a female model’s bareheaded shoot from the premises Gurdwara Sri Darbar Sahib. The pictures sparked outrage in the minority community and they asked the government to take action against it.

Chief Minister of Punjab, Sardar Usman Buzdar had taken notice of this issue and directed an inquiry on this matter. Admin - March 14, 2017
0
A Lahore based creative artist is capturing pictures to bring Hollywood characters to life in an amazingly interesting way. Tez Aftab runs a Lahore... 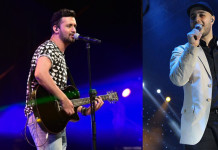