The Karachi Kings are ready for yet another round of cricket in the Pakistan Super League (PSL) season 3 with new captain Imad Wasim and probably the biggest star player in the league, Shahid Khan Afridi. The latter, who is also the president of his new franchise, feels that it is not be a big deal to play under a young captain, rather, the big thing for him is that he is still playing and not getting retired.

“As a cricketer, it won’t be a big deal to play under Imad’s captaincy,” told Afridi on Fahad Mustafa’s Jeeto Pakistan, where he was invited as a special guest with his new teammates. “The big thing for me is that I am still not retiring, but making other retire,” he added.

The new president of Kings credited former cricket great Rashid Latif for making the right combination with coaches and also praised Wasim for helping them.

“I wanted to enjoy and feel relaxed and let Imad feel the pressure.”

In an impromptu meet and greet before the show, members of the team and the management spent time with their supporters and sponsors for the upcoming season. Among the other players present at the event were Babar Azam, Usman Khan Shinwari, Osama Mir, Tabish Khan, Hasan Mohsin, Khurram Manzoor, Mohammad Rizwan, Mushtaq Khloro, Saifullah Bangash, Mohammad Taha, Mohammad Irfan and international cricketer Ravi Bopara.

The event was also attended by celebrities including Faisal Qureshi, Humayun Saeed and Sanam Baloch. The event also included the official launch of the Karachi Kings anthem, performed by Shehzad Roy.

Speaking at the event, Mr. Salman Iqbal – owner Karachi Kings said “As a collective unit, the Karachi Kings is more than a team, it is a family. We are confident that this family will display a relenting drive and passion to achieve success in this season of PSL. With the final scheduled to be played in Karachi, it would make us immensely proud to be crowned the victors on our home ground with the people of Karachi. I am also very thankful to Ravi Bopara for visiting Karachi for the team’s launch event, it creates a very positive image of Pakistan, which has always been our goal.” Web Desk - September 12, 2020
0
Sanam Saeed believes that as a woman she is not safe anywhere in the world at any time and anything can happen to her. Speaking... 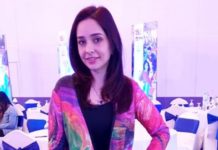