Game shows in Ramadan have become a common trend for the last couple of years in Pakistan. People have mixed reactions, whether they should be a part of this holy month or not.

To find out the popularity of revamped game shows this Ramadan, behtareen.pk conducted a poll on social media. The poll’s results concluded that there is a decline in the viewership of Ramadan game shows.

According to the results at the end of the poll, 63% of the public is not watching any of the game shows this Ramadan. Whereas, 37% voted in favor of these shows which are being telecasted immediately after Iftaar. It must be noted here that, this Ramadan, Game Shows have been transformed into league format. Different teams with a celebrity captain each are fighting for the mega prize. This year, there is no live audience following the Standard operating procedure (SOPs) provided by the government due to widely-spread COVID-19.

Read Also: Revamped Jeeto Pakistan is all set to spread smiles during Ramadan Admin - December 14, 2017
0
Google, the biggest online search engine has released lists of most searched people, events and news of 2017 and surprisingly, none of the mainstream... 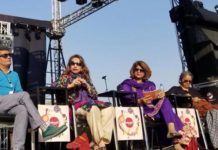