Guess who’s back to spice up our screens? Yep, it’s none other than the adorable duo we all love, Sajal Aly and Ahad Raza Mir, amongst many others.

Aangan, a highly anticipated Momina Duraid production, finally dropped a couple of teasers last night and the response is groundbreaking! Directed by Mohammad Ehtishamuddin, this is a pre-partition drama with a star-studded cast, all about the revolution of women in that particular period and will be told from a female’s perspective.

We see the first teaser highlighting the on-screen romance between Ahad Raza Mir and Sajal Aly’s characters, Jameel and Chammi respectively. Earlier, we saw them create magic on Yakeen Ka Safar, and their chemistry was appreciated all around, calling them on-par with legendary on-screen couples like SRK and Kajol. Fans have been waiting for #Sahad to make sparks fly together in another production and boy, IS THE WAIT FINALLY OVER! Who can resist Chammi’s bubbliness and Jameel’s tall, dark, and handsome vibes? Viewers all over are literally in awe! Another teaser displayed a sort of potpourri of the entire backdrop and the rest of the cast of Mawra Hocane, Hira Mani, Ahsan Khan, Abid Ali, Sonya Hussyn, etc, and was equally thrilling. The entire cast has done a phenomenal job, and the intricate production just adds to the charm. We can’t wait for the series to finally drop! 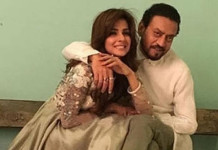