Defeating a team as strong as Islamabad United is no small feat, and while the pressure rises as Peshawar Zalmi is now in the final, Hassan Ali is just as excited to play against Quetta Gladiators.

“We are very excited as we are once again going to play the final. It was a do-or-die match. Their team is just as great, and it was a big deal to defeat a two-times champion,” he said.

Speaking of the final, we’re sure everyone’s curious about what the team’s winning strategy is for playing against a team like the Gladiators. “Of course, they have been playing brilliantly. I can’t really disclose our plan but it’s very simple. We will try our best to play properly and to win the series,” he said.

Moreover, he was confident in his form, and thought the management’s decision to put the player in rest mode for the series against Australia was probably for the best. But the player is hopeful to give his best in the upcoming World Cup, and the tournament against England.

“[The decision] is all up to the management, the coach, and the selectors. I had been playing cricket for the last six months, and I personally felt the need for rest, and that’s exactly what they decided. I will hopefully maintain my fitness and practice, and will continue carrying this form for the World Cup and England series,” he said.

Also read: Dean Jones calls PSL security ‘brilliant but a bit too much at times’

Additionally, the Karachi crowd has been a great source of motivation for the player to play well, while being a great step for Pakistani cricket. “I would like to thank everyone who comes to see the match. It should be known that we are peaceful people, and we would like to see more cricket in our homeland,” he said. 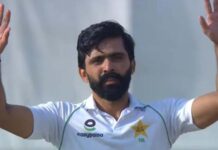 Web Desk - November 18, 2020
0
Amna Ilyas believes actors wearing short dresses or TV content is not the reason behind increasing Rape cases in the country. Speaking to Voice of...