The first-ever Pakistan International Screen Awards (PISA Awards) become uncertain after they failed to fulfill their commitments with the nominated famous actors and jury members. The veterans took to social media to reveal the fraud being done to them by the management and it literally put the PISA Awards in hot water.

Bulbulay famed actor Nabeel Zafar bashed the PISA’s management which contacted him through a PR company named ‘Bodybeat’. He revealed that his name was used to promote the event but on the last day he was left confused after not being contacted by the management.

“I was approached by the organizers through their PR company Bodybeat and requested to attend the show in Dubai on Friday, 7th February 2020. Like me, there were many of my colleagues and renowned actors who were asked for documents to travel. Now suddenly the organizers have stopped their communication and put us in deep confusion as many of the people in Dubai have been asking about our appearance in the show,” he wrote on social media.

Nabeel further said that such an unethical approach will defame the entire fraternity in the country. “Such a move is an insult to me and many other artists who were contacted and committed to travel. It will also bring a bad name to our industry especially in front of people who have bought tickets to the show,” he added.

It must be noted here that Nabeel had been nominated for his comic role in one of the famous comedy-dramas of Pakistan ‘Bulbulay’.

Apart from Nabeel, another Bulbulay famed actor Hina Dilpazir, senior-most actress Bushra Ansari, comedy actor Adnan Shah Tipu and comedian and actress Nadia Afghan are also among the victims of this fraud. These actors also spoke against PISA’s unprofessional attitude to defame Pakistan’s industry. All the above-mentioned actors were also nominated for the award in different categories. Moreover, PISA management also did fraud with their own jury members. Along with veteran actors, they also did not give tickets to some of their jury members including Omair Alavi, a senior journalist of films and Tv.

With everyone criticizing #PISA for their unprofessionalism, their haphazardness and their attitude towards nominees (and in my case, Jury), here is my take.

On the other hand, a private jet was reportedly booked for some actresses who were not even nominated for any award but had to be flown out before others due to having dance rehearsals. Those include Urwa Hocane, Sonya Hussain, Ushna Shah, Momal Sheikh, Sarah Khan. Now, a serious question arises here that if this is even an award show? Or simply a dance show? Web Desk - July 6, 2021
0
Hailed from Rahim Yar Khan, Kiran Ishtiaq doesn't have legs and hands but her strong willpower and nerves of steel make her different from... 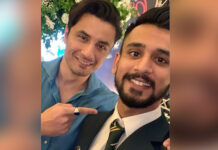