Mehwish Hayat asked Vasay Chaudhry to not body-shame anyone on a Tv show or public platform as people pick up quickly what celebrities say.

Hayat appeared on Chaudhry’s show ‘Ghabrana Mana Hai‘ at ARY Digital. During the show, the host asked the actress which Pakistani actor is suitable for Ertugrul’s role. “There are many actors who can play Ertugrul, like Fahad Mustafa and Humayun Saeed,” she replied.

Adding on, Chaudhry also asked which actors can play the role of companions of Etrugul like Turgut Alp. Mehwish called the name of Ahmed Ali Butt, to which, Chaudhry stopped her and said Ahmed can’t do it.

“Now, please stop here. Ahmed on a horse like Ertugrul companions and that horse has to run. We have to save the horse,” he quipped.

Hayat interrupted immediately and schooled Chaudhry for body-shaming his fellow actor and friend. “Do not body-shame anyone in front of me. I mean you can do this in your friend’s circle but it is not right on such a platform. People would pick this up and repeat and you will be responsible,” she said.

It must be noted here that Mehwish has already spoken a lot about body-shaming on her social media accounts which have a massive following.

Read: ‘People use social media as license to bully others’ Mehwish Hayat 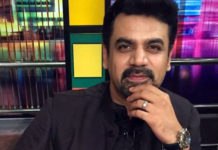