Speaking on ‘Say It All with Iffat Omar’, Pasha said that female actors play diverse roles as compare to male actors. She thinks that men usually play malicious characters, hence they get paid higher.

“Women get more diverse roles whereas men mostly have the typical torturer part. However, men definitely get paid more than an actress who is at the same level as them. There’s definitely a lot of factors behind it including the supply and demand of male actors but for now, this is the reality,” she said.

“There was a time when they used to show the elder sister as the positive character and the younger one as the evil one. Then came a trend for issue-based dramas like Udaari. There were many more shows created on societal problems after that. Now it’s more about the second wife in dramas, it’s the latest trend. And I just think it’ll go away as well when something new comes along,” the actress maintained. Web Desk - January 5, 2022
0
Mohsin Abbas Haider shared his fan moment after he received an autograph from one of the superstars from Bollywood, Shahrukh Khan. In an Instagram post,... 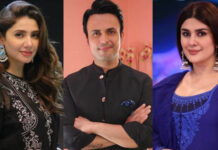