Khalil-ur-Rehman Qamar reacted to Mahira Khan’s one-year-old comments against him on a social media platform.

During an interview with Vasay Chaudhry on his show at ARY Digital, Qamar said the actress could have contacted him personally instead of going out in public.

“I have always respected Mahira Khan. But, her public tweet against me shocked me a lot. Had she contacted me directly, I would have explained the situation that elicited such a reaction,” he said.

It must be noted here that Khan reacted to Khalil’s abusive reaction to feminist activist Marvi Sarmad during a live show. Khalil’s bashing to Sarmad and her replies sparked outrage on social media. People were divided with their opinion on this issue. 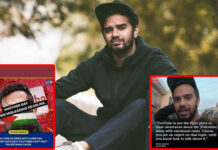