Adnan met former PM, who is charged in couple of cases in Pakistan, to not only invite him for his newly released film ‘Dam Mastam’ but also to seek his support for local film industry.

In a video message released on social media on Monday, Adnan confirmed meeting with Nawaz whose brother Shahbaz Sharif is currently the PM of Pakistan.

While reacting to his video, a lot of people criticised him for meeting an alleged corrupt.

Thank you Adnan Siddiqui for proving my point and screw your movie… https://t.co/UvWpnrwVds

Imagine someone being as dumb as Adnan Siddiqui, who chose Nawaz sharif of all the people to promote his movie.
Matlab itni buri lagti thi apni film, hain.???

Sorry Adnan Siddiqui! You’re done! Can’t call a guy a “Star” who hangs out with A CRIMINAL & TRAITOR during a revolution! pic.twitter.com/oAtyFR2nOa

Adnan Siddiqui just fired a bullet in his own foot. 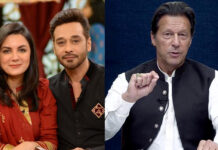 Admin - December 23, 2017
0
Faisalabad based artist Bilal Haider has releases his lyrical Video of song Aaya Vey. Haider is a singer, songwriter and composer, who currently lives...