Prime Minister Imran Khan believes that women wearing few clothes will have an impact on men in a society like Pakistan.

Speaking to Axios on HBO, PM Khan clarified his earlier statement in which he said sexual crimes in Pakistan were rising because of a decline in Pardah.

“See, we live in a society where if a woman is wearing very few clothes, it will have an impact on men unless they are robots,” the Premier asserted.

“Such things have an impact here because we don’t have discos or nightclubs here and it is completely a different society,” he added.

Earlier in a statement, Khan said “in any society where vulgarity is prevalent, there are consequences.” The statement was followed by immense criticism on internet, with people demanding an apology from the PM. Web Desk - February 5, 2021
0
Social media was flooded with celebration after Pakistan's Ahmed ‘Wolverine’ Mujtaba knocked out India's Rahul Raju in just 56 seconds in a lightweight match at One... 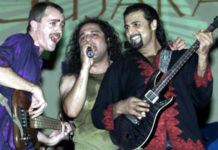 ‘Theater is too lively, want to do once in my life’...