Yasir Hussain happens to be one of the actors who are known for their witty take on things. But it seems like the actor’s comical approach has landed him in hot waters once again. Hussain’s upcoming project is an Eid telefilm in which he will be seen playing the role of a man and a woman both, and his look has gotten mixed reviews till now.

READ: Yasir Hussain on playing a woman in Help Me Durdana

However, the general public has been confusing Hussain’s character with that of a transgender, when that is not the case. As we reported earlier, the actor plays the character of a man who has to pretend to be his mother, as the circumstances call for it. And seeing the actor post pictures of his transformation on Instagram, many inquired why an actual transgender person wasn’t chosen for the role.

But much to everyone’s dismay, Hussain responded to one such comment with ‘matlab aap ko job chahiye?’ (means you want the job?) which comes off as transphobic in all aspects. Many social media users were quick to point out that the actor’s tone was demeaning towards transgenders, which is already a sensitive issue in society. 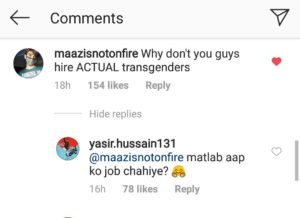 These reaction tweets will give you a fair idea of how strongly the public has reacted:

Yasir hussain is playing a role of transgender in some drama and this guy asked an important question.

and look at the response of this so called educated celebs, why most of them are shit? pic.twitter.com/LZG8jzLIQE

someone tell this dude that he can keep his fucking drama. This really shows that these celebs dont even care about these issues and only using them to gain popularity in the woke crowd. Yasir Hussain can go fuck himself https://t.co/uQcnm4nAxj

Today has been just another daily reminder that most Pakistani "celebrities" are actual trash. #YasirHussain #AliZafar pic.twitter.com/YdkTmvJBrE

yasir hussain reminding everyone that pakistani media industry runs on a total of two and a half brain cells. also, i literally don’t understand what fuels this guy’s narcissism. he’s a mediocre actor and does a disgrace-to-comedy-shows show that no one gives a shit about https://t.co/6hYPtBSFCB

Yasir Hussain is a certified asshole and a painful reminder of the kind of people existing in abundance in our industry.

So not only is yasir hussain, a cis man, playing the role of a transgender he's also transphobic. what an ignorant jaahil aadmi pic.twitter.com/XlOjUx7Yum

Some also brought up a previous incident where the actor was heavily criticized.

Even at Hum Awards when Ahsan khan won an award for Udaari, the same Yasir Hussain joked

so yasir hussain, after his casual insensitive remarks about child molestation a few years ago, has yet again passed such disgusting remarks. They don’t understand the value of their fame or their words. Har parha likha insaan jaahaliyat se marhoom nahi hota pic.twitter.com/PE2qt9P6Mt

He joked about child abuse what else do you expect

While some also brought up his relationship into the mix.

Iqra aziz is dating that Yasir Hussain guy?The guy who made an absolutely crass joke about child abuse,mocks Transgenders and basically an idiot.I mean sister,come on.

However, a few pointed out the reality of his role, but still called him out on his unfavourable response.

He's playing the role of a guy who dresses up as a girl to get close to the one he loves. Anyhow,what he said was VERY WRONG I agree. They are representing sth on a national platform and the industry might as well educate them about morals.

Following the backlash, Hussain took to Instagram to clear some apparent misconceptions about his role.

“I am not playing a transgender and by no means do I ever want to disrespect a gender that I have immense regard for. Once the show is out you will be able to understand the character better and will know that my role has nothing to do with humiliating or mocking anyone,” he wrote.

“We as public figures receive a lot of retaliation/negative comments and just because I chose to reply to a comment with a joke does not in any way mean that I have no respect for a certain gender. Other negative comments that we receive are never made a controversy out of so this also shouldn’t be. It is just a character intended for humour and nothing else. Hope this clears the doubts that some people have,” he added.

I just wanted to clear the misconceptions that some people have about my recent role. The images that you have seen over social media of me wearing a Saree are for a project in which I am playing the role of my mother. I am not playing the role of a transgender and by no means do I ever want to disrespect a gender that I have immense regard for. Once the show is out you will be able to understand the character better and will know that my role has nothing to do with humiliating or mocking anyone. We as public figures receive a lot of retaliation/negative comments and just because I chose to reply to a comment with a joke does not in any way mean that I have no respect for a certain gender. Other negative comments that we receive are never made a controversy out of so this also shouldn’t be. It is just a character intended for humour and nothing else. Hope this clears the doubts that some people have. #yasirhussain #durdana #respectforallgenders

Soon after, actress Iqra Aziz also came to the actor’s defence, saying how everyone should focus on themselves first rather than pointing out a public figure’s comment. “All of the hate comments here are a disappointment. You all call yourselves humans and want to help make this world better but you are the same people who wouldn’t even want to make transgenders your neighbours. If you want to teach someone about right and wrong, first look at yourself and what you’ve been doing wrong that today we are having to have movements for their equal rights which are already their right,” she wrote.

“We should respect everyone and this means humans in general, not just transgenders. I don’t want to offend anyone here but please start the good with yourself first rather than misunderstanding a public figure’s comment for your own gain,” she added.

Once again, the general public expressed their dismay, as they explained how Hussain’s insensitive comment was offensive, rather than what role he is playing.

OH WHAT A LOSER YASIR HUSSAIN IS.
ATLEAST PRETEND THAT YOU'RE APOLOGIZING FOR MAKING A JOKE THAT WASN'T A JOKE AT THE FIRST PLACE.

What is wrong with pak celebrities,first this Rabia Butt cursed someone on twitter,now this extra ticky size Iqra Aziz and her boyfriend are being rude to people on Insta.Fame isn't for everyone, Someone said it rightso iqra aziz is defending yasir hussain's transphobic comments. pic.twitter.com/b0uiBQSsSQ

Yasir Hussain didn't apologize, Iqra Aziz tried to defend him in the most bizarre way but who's gonna defend Iqra Aziz now? Sidra Aziz will be warming up I guess.

While it is imperative for the public to get their facts straight about his role, it is also crucial for Hussain to understand that not everything can be passed off as a witty retort. With that said, you can check his dual role out in Help Me Durdana, as it premieres on Eid. Web Desk - June 8, 2021
0
Federal Minister for Information and Broadcasting, Fawad Chaudhry confirmed that the upcoming Pakistan tour to England will not be televised in the country. According to...