Yasir Hussain is known to take risks when it comes to proving his acting chops, and it looks like he will soon be donning another unique persona. Preparations for Eid content are in full swing, and Hussain is busy shooting for a telefilm titled Help Me Durdana, and we’ve got all the details.

Interestingly, the actor will be playing two characters, one male and one female. Behind-the-scenes footage is already making rounds on social media, and Hussain’s transformation is pretty convincing, to say the least.

“I play the character of a guy who likes a girl and wants to marry her, but due to circumstances, he has to take over the role of his mother,” he said, revealing how he will be playing both the son and mother in this comical telefilm.

Previously, a similar role was taken up by Faysal Qureshi in Kis Din Viyah Howay Ga, and Hussain feels his take cannot be completely unique. “It can’t be entirely different, [considering] he is quite a big actor himself,” he said.

“It is a comedy telefilm, and things are not meant to be taken that seriously with comic roles. The role of the woman is meant to tickle your funny bone. And whenever an actor tries to portray such a character, it isn’t always entirely convincing or believable. They are always recognizable,” he added.

Moreover, Hussain adopted a method acting approach with his role, when he decided to stroll around donning the entire look of a woman.

“I drove around and went to the mall in the whole attire, and I felt very odd. I am surprised at how women carry themselves in the society, with unsolicited (and unfavourable) stares all around. It seems extremely tough,” he said.

Taking over this role has surely given him a new perspective, and he extends the same advice to other actors as well. “I feel like every male actor should play a character as such, so that they can comprehend how hard it is for women out there,” he said.

Apart from Hussain, the cast includes Ushna Shah, Mehmood Aslam, Zulqarnain Haider, and Noman Sami. Directed and produced by Aabis Raza and Fahad Mustafa, the film will premiere on ARY Digital on Eid. Web Desk - October 7, 2021
0
Hania Amir said she had to compromise on her mental health while getting into Instagram battles and gossips out of nowhere. In her recent question/answer... 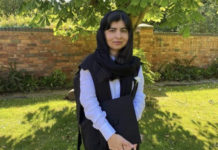