Often remembered as the notorious Mir Hadi from Khaani, Feroze Khan has quickly set firm roots in the entertainment industry. He is no longer referred to as just Humaima Malik’s brother, with hardly any accolades to his name. Coming a long way from hits like Chup Raho and Gul-e-Rana, the heartthrob is currently stealing hearts with his stellar performance in Romeo Weds Heer.

Candidly talking about his life with BBC Urdu’s Fifi Haroon, Khan touched a few sensitive topics, like his dynamic relationship with fellow co-star Sajal Aly, which is still talked about even after he’s betrothed to someone else. Haroon casually brought up Aly’s teasers of Aangan, and the actor was all praises for his former co-star. “Sajal has literally blown me away with her acting, her dialogue delivery, and her expressions. It’s amazing, and very well-done,” he gushed.

After playfully beating around the bush for a while, Haroon bluntly asked if he missed Sajal. “If I miss Sajal, I’ll just pick up the phone and call her, there’s no issue! We are quite normal now,” he insisted. Probing further, the interviewer pressed upon the nature of their relationship now, to which Khan replied, “We are still really good friends and I respect her a lot. She is a really brilliant actress and I wish her all the prosperity in the world.”

Haroon hit a nerve when she mentioned rumours of Khan not getting along with one of his frequent leading ladies, Sana Javed. He cleared the air by mentioning how their characters in Khaani, being total opposites, created some tension which lingered on. “Till Romeo Weds Heer, we had the same [tense] impact from our characters from Khaani, where perhaps we did not get along. But by the time we were packing Romeo Weds Heer, we were on great notes and we’re quite amazing together now,” the actor explained.

One can only hope this candid conversation puts all the speculations, surrounding the actor, to rest. He possesses a great deal of fervour regarding his marriage, and feels like it made him a better man. And the actor is fully geared up to work on new projects, taking a break from his consistent co-stars. Let’s wait and find out what he puts out soon enough. Admin - May 8, 2017
0
As Pakistan’s one of the most recognized high street fashion brands, Breakout strive to deliver fashion, excitement, newness and value. Breakout has just launched... 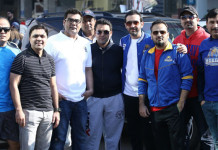