With Eid soon to be upon us, preps for Eid telefilms are in full swing. And apparently, a telefilm starring Affan Waheed and Yumna Zaidi has also been added to the list.

According to Dawn Images, the title of the telefilm is yet to be revealed. However, Waheed did spill some details about his role. “My character’s a happy-go-lucky guy who’s a little arrogant and full of himself, raised by a single mother. Yumna, on the other hand, is raised by a single father,” he said.

The story revolves around their parents playing cupid, insistent on pairing up the two leads and getting them married eventually.

“So we end up collaborating on how to get the marriage emergency out of our way by hoodwinking our parents into believing that we like each other and eventually wriggling out of it. But there’s a catch at the end of the film which the audience has to watch to find out for themselves,” he added.

With Mohsin Talat at the helm and Adeel Raza as the writer, the film seems like a dose of lighthearted fun we all need on Eid. Mehwish Hayat in the ranks of Muslim women changing the world

Admin - August 27, 2019
0
Mehwish Hayat has another feather to add to her cap through her noble activism and investment in speaking up for Pakistan. While she has... 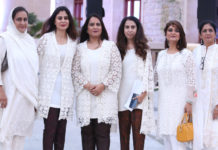