Dr. Richard H. Meadow, who is a senior lecturer on Anthropology, at Harvard University, in his research paper on the subject of Perimeter Walls at Harappan sites said that study of the Indus Civilization has been going since the end of the 19th century, although the civilization itself was only recognized as a cultural phenomenon by Sir John Marshall when he noted the similarities between the archaeological remains excavated at Harappa in Punjab and Mohen jo Daro in Sindh, adding that these two archaeological sites have since dominated discussion of early complex societies in northwestern South Asia.

Meadow, who is author of more than one hundred publications detailing aspects of his research in both archaeology and zooarchaeology, further said that future archaeological research at Mohen jo Daro might do well to investigate the location of perimeter walls since rebuilding them might serve as a means of protecting the site while maintaining the integrity of the representation of the site to the public.

Indian Archaeologist Dr. Vasant Shivram Shinde in his paper said that the Ghaggar basin in the northwest part of India is very often referred to as ancient Saraswati basin, adding that explorations and surveys carried out in this region have brought to light a large number of Harappan sites, of which very few have survived till date. Excavations carried out at selected sites have pushed back the beginning of the Harappan culture to around 5000 BC. He informed the audience that data had been extracted for the first time for ancient DNA studies and facial reconstruction which was underway. The presentation will showcase the new discoveries in the Ghaggar basin as well as changing perspectives of the understanding of Harappan culture, he hoped.

In some excavation in India, he said, burial sites had been discovered but the study of rituals leaves much to be desired. Dr. Vasnat further said that in India, local communities had been mobilized to play effective role in protection of the archaeological sites.

Dr. Sarfraz Solangi in his paper shared the preliminary findings of the of let recent dry core drilling at Mohenjodaro.

Spanish archaeologist Ms. Ann Andersson in his research paper asserted that the archaeological remains at Failaka island (Kuwaiti) were interpreted as a trading station functioning as a hub in the trading network transporting goods between Mesopotamia and potentially as far as the Indus region.

A beautiful and young girl artist, attired a traditional dress, when paid a rich tribute to the dancing girl Sambara, discovered from the Mohen jo Daro, her performance was so real and impressive that audience for a short while felt like that Sambara has perhaps found reincarnation.

MNA, Faryal Talpur in her brief address said that the mighty Indus river flows from Hamalya right to Arabian sea, passing through Gilgit and Baltistan, Kashmir, Sawat, KPK,Punjab, Balochistan and Sindh before conversing with the sea, adding that on both embankment, civilizations flourished since millennium.

Sindh Senior Minister Mr. Nisar Ahmed Khuhro also attended the concluding session. In his brief speech, he praised the culture department for documenting each and every event of this conference. He was optimistic that conferences and symposiums on Mohen Jo Daro would be held at a regular interval. Admin - October 21, 2019
0
Item numbers are a surefire way to enrage most Pakistanis, but that won't stop filmmakers from including them in their films. As of recently,... 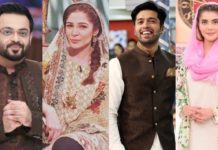