Yet another tv actor Azfar Rehman is set to make his big screen debut this year. The small screen actor will be making a brief appearance in Humayun Saeed, Urwa Hocane, Ahmed Ali Butt and Mehwish Hayat starrer Punjab Nahi Jaungi, which is scheduled to release later this year. “I am playing Mehwish’s love interest in first half,” shares Rehman at the shoot in Karachi.

‘We had this very interesting chemistry, but just out of slight little argument, we just have a fall out, and she goes her way and I go mine,” he added about his role.

Read: These Pakistani actors are growing moustache and we tell you why

Rehman was shooting his birthday party scene with Humayun Saeed and Mehwish Hayat when we caught him last night in Karachi. “My character is Mehwish’s best friend, and we have studied together in London and after graduation we have come back and now we are looking to the future,” he told.

When asked if he would be dancing in the film, Rehman told that he was a horrible dancer. “I am a horrible dancer, and I want to tell everybody whoever wants to cast me, please don’t bank on my dancing.” he warned. “I did very brief training for this particular number. I trained just for two days, and I don’t have a major dancing portion but yeah, I will be dancing,” he confirmed.

Talking about television and roles Rehman did in dramas, he told that television was a different medium altogether and not very often he did negative roles. “My character is not actually negative but this boy is slightly arrogant, he is slightly aggressive, so it’s slightly different from television,” he shared.

Rehman recently surprised many when he tied the knot in a small event in Karachi with only close friends and family members in the gathering. And now, the actor is ready with yet another surprise. Lets wait and see!

‘Urdu commentary is still tough for me’ Urooj Mumtaz 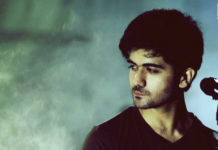