Meera jee is evidently shaking up the whole entertainment industry with her comeback. Her film Baaji is yet to release, but the hype over the film is unmatched. In fact, famous personalities from neighbouring countries are acknowledging and commending her talent. And just recently, Aliya Bhatt’s mother Soni Razdan was all praises for the Lollywood superstar.

In an interview with Fifi Haroon for BBC Urdu, the Bollywood actor and director who gave Meera her big break in Bollywood with Nazar stated that the actress is a dream to work with. “As an actress, she (Meera) totally gives herself to the director,” she shared, referring to her experience of directing Meera.

Razdan also mentioned how there were a few hindrances, considering the difference in film standards of the time, but Meera came through with ease.

“There was a little bit of a film cultural problem because the films she was acting in at that time in Pakistan were a little different to perhaps my approach that I was trying to do in my films. But as an actor, she was a dream; she is always working, she is always on. That killer instinct that she has is what has seen her become such a successful actor,” she added. Admin - September 4, 2019
0
What should we call a guy with extraordinary achievements in almost every aspect of his life? We call him Junaid Khan, because he is... 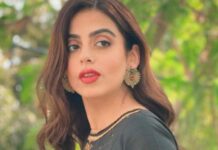