After winning hearts with her debut performance on big last year with blockbuster Janaan, Hania Aamir has now begun shooting for her next silver screen role with Hamza Ali Abbasi and Osman Khalid Butt in MD Productions and HUM Films’ upcoming project Parwaaz Hay Junoon. The film is a tribute to Pakistan Air Force.

The film, which is a tribute to Pakistan Air Force, will mark the directorial debut of award-winning drama director Haseeb Hasan. It is been penned by none other than Humsafar, Diyar-e-Dil and Udaari famed writer Farhat Ishtiaq.

The film is being produced in collaboration with Pakistan Air Force and will be focusing on highlighting the stories from real life. It will feature real life Air Force pilots and personalities along with the lead cast. ‘People who hate me are hiding and listening to me” Meesha... 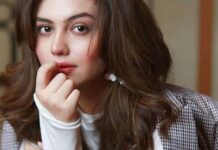