After all the drama and delays, ‘The Legend Of Maula Jatt’ (TLOMJ), is finally set to release across Pakistan this Eid-ul-Fitr, the producers of the film confirmed.

The lead actor Fawad Khan also revealed that the adventure begins this year and the film will surely rule the hearts of people across the world. He took to Instagram to share the news.

This was the day all the blood, sweat and tears began. It was my first day of the shoot. Thought we’d share this with you as the adventure begins this Eid-Ul-Fitr. #TheLegendOfMaulaJatt #TLOMJ #Eid2020 Picture courtesy of Bilal Lashari as is the whole film! #Finally

The other cast of the film includes Hamza Ali Abbasi, Mahira Khan, and Humaima Malik. Humaima also shared the release date of TLOMJ.

The legal battle between Bhatti and the producers of ‘The Legend Of Maula Jatt’, Bilal Lashari and Amara Hikmat came to an end with an intervention of some elders earlier this month which gave green signal to the release of this film. 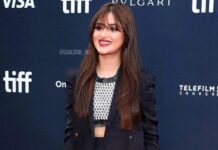