Sheheryar Munawar recently got to direct a short film for Mahira Khan’s platform Mashion, the theme of which focused on domestic abuse. Speaking about the project with Fuchsia, the actor and director shared his thoughts on the making of it and the pressing issue it explored.

“After a few months of Prince Charming, Mahira called me and said she wanted me to do this project for her. The theme which was explored this year was domestic abuse following Noor Mukaddam’s case. And mind you, I also had to keep in mind that I was creating a third episode for it, and it had to stay in the original story’s world,” he said.

Munawar also shared how he took the lead on the project and reworked the script to a version they all loved. He also went on to share how abuse isn’t a gendered phenomenon, it exists regardless of gender. “Men get abused too. I’ve been in a bad relationship too. But Pakistani men aren’t allowed to cry and when they’re not allowed to feel pain and cry, then the man becomes an animal and then beats the women up. I’m not justifying it but it happens this way. We need to endorse sensitivity amongst all genders,” he said.

Talking about his approach for Khan’s role in the film, he shared how change in the mindset doesn’t happen overnight, and how her character in the film understands that. “Why do women continue to stay in abusive relationships? It’s not like women are only scared of the consequences. They’re also in love with their abusers, that’s why it’s a toxic relationship,” he said.

“You can have a courageous moment to stand up for yourself but you’ll end up breaking the next minute because you don’t know life without that man. That is why you’ve been tolerating the violence. It doesn’t take a brave woman to stand up for herself, it just takes momentary courage,” he added.

Once again bringing up the Noor Mukaddam case, Munawar brought up how helpless women feel in such situations and how their reactions are mostly internalised. He also added how much family support matters. “Hate isn’t the lack of love, it’s a reaction to betrayal. And my heroine was not just Mahira. Her whole family had to be the heroes. The abused always needs their family’s support,” he said.

Haven’t gotten the chance to see the short film yet? Check it out below. 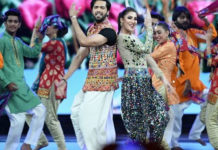 Lux Style Awards called off due to COVID-19 epidemic