Tv actress Sonya Hussyn believes that people should act responsibly while appearing on media as they create a huge impact on viewers with their words and actions.

“The woman [Firdous] should have shown some responsibility. But, if PPP’s MPA had insulted the government official, then the stance was correct. If someone deserves it then it’s alright,” she said.

“When you are on a media platform, you should keep your personal views aside and talk responsibly. The one should not disrespect women, for instance, Khalil Sahab did,” she added.

It is pertinent to mention here that ‘Mere Paas Tum Ho’ writer abused feminist activist Marvi Sarmad during a live show which led to a new controversy. Social media was divided over his attitude and comments towards Sarmad. Internet trolls Nida for being ill informed about Formula 1 racing...

Web Desk - September 4, 2021
0
Nida Yasir has once again become the center of trolls after a clip from her old Morning Show episode went viral on social media. In... 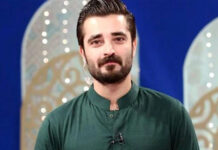 16 Reasons Why the 16th Young Leaders Conference Would Be a...