Yasra Rizvi has been making rounds on social media for a couple of days after her picture of having a baby bump went viral.

While reacting to the massive response of people on her pregnancy, Yasra highlighted that such things matter to people more than work.

“In our country, the newsworthy bit is that I am pregnant,” she quipped. “Not the fact that I am also directing probably the most important script I have gotten to direct so far while due any time now! Indeed we are a nation totally obsessed with marriage and one’s ability to procreate,” the actor shared. Meanwhile, the Churails star thanked her fans and well-wishers for taking notice of her pregnancy.

Read: ‘I am feminist since I didn’t even know its meaning’ Yasra Admin - June 11, 2019
0
The DG ISPR Major General Asif Ghafoor might just have revealed what Ahad Raza Mir will be appearing in next. In a congratulatory tweet... 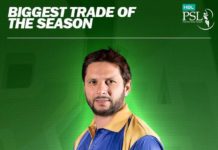