Sahir Lodhi announced his first big screen project titled Raasta in November 2015. The film spent sixteen months in screenwriting, casting, shooting, editing, marketing and not to miss, controversies. During this period, a majority of us ‘unintentionally’ prepared our minds to witness yet another disaster in Pakistani cinema. Hoping against the hope, the film released across Pakistan on March 30th and ‘unfortunately,’ totally lived to the expectations.

The story of the film is mainly, in fact, totally about Sameer, the lead character played by Sahir Lodhi himself. He is a well educated ‘guy’ who is searching for job for past eight years. His elder brother Sultan (Aijaz Aslam) is an honest police officer and married to Sana Fakher and they have a daughter. The police officer has been getting transfers every now and then because of his honesty. Now wait, does the plot remind you of any Tamil film dubbed in Hindi? It really does, to me at least.

The film also stars Shamoon Abbasi as Shahnawaz, who has done what he is best known for. His younger brother Sherry (Naved Raza) is an extraordinarily over smart ‘Chota Don’. Expectedly, they are smugglers and the honest police officer Sultan is the hurdle for them.

Without further revealing the story, let’s quickly review different aspects of the film. Firstly, the story of the movie is horribly popular and seems a mixture of some old Bollywood movies. The dialogues are annoyingly catchy. Chances are very high that you will end up cracking on of your own.

Except Shamoon Abbasi and including Sahir Lodhi, all them deserve no appreciation for their acting. And to be very fear, only Aijaz Aslam is the disappointment, rest of them actually lived up to the expectations. One thing which could have saved their faces to some extent was editing but again, as expected, they failed there as well.

Music of the film worthed a little appreciation except the two item numbers but then, all of them looked copied from some very known Bollywood songs. In fact, the picturization of the songs was also copied. 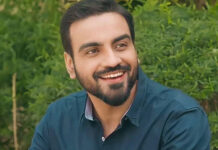