Pepsi Battle of the Bands kicked off season two after almost fifteen years and opened doors for underground bands that had been playing gigs without any recognition for a long time. The platform not only gave bands a space to prove their skills but also highlighted some exceptionally talented individual musicians. They are nothing less than a motivation for the youth who is interested to make career in music and play some instruments.

We have compiled a list of our five favorite musicians from top three bands of Pepsi Battle of the Bands season two;

Daud Ramay of Roots:
Daud Ramay of Roots is one of the best drummers from Lahore. This guy actually started his music with a heavy metal band, something which also reflects in Roots. His band members come up from Karachi, Lahore and Islamabad, and this is the reason that he is a much known musician in underground music of not only Lahore but the whole country.

Meet Daud Ramay from Roots! Daud’s drumming speaks for itself with its cohesive chops and catchy beats! Here’s an exclusive session with Daud because #DaudKaSceneHai #PepsiBattleoftheBands

Vais Khan of Kashmir:
Vais Khan, the lead guitarist of Kashmir is probably the best available guitarist in Karachi underground music scene. Not only that, he is our most favorite guitarists from all bands in Pepsi Battle of the Bands. This guy is the backbone of Kashmir and very fluent when it comes to each note.

Meet Usman Siddiqui and Vais Khan the guitar gurus behind Kashmir – The Band, as they rock and roll in this dual piece, exclusively for you! #PepsiBattleoftheBands

Shane J. Anthony of Kashmir:
Another drummer made it to our favorite musicians list. Shane J. Anthony from Kashmir is an experienced drummer who comes from a very strong music background. He has been playing in churches for a long time now and is one of the bests in his field.

Ahmad Jilani:
Ahmad Jilani has very unique yet powerful vocals and this is the reason that he is our favorite vocalist in the competition. This guy is the front man of his band Badnaam and also plays lead guitars.
PS: We are still playing Kala Jora from episode three on repeat.

With his powerhouse vocals and skill, Ahmed Jilani, the frontman of Badnaam, needs no introduction! Catch his exclusive solo in the video. #PepsiBattleOfTheBands

Nasir Siddiqui of Roots:
Nasir Siddiqui is our favorite Bass Guitarist in the competition. He is cool and knows his job. Siddiqui also plays lead guitars and yeah, he can produce music. Check his soundcloud;

The final of Pepsi Battle of the Bands is just two weeks away and we are counting days. Who do you think will be eliminated next? 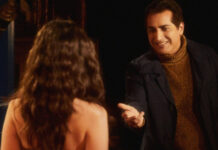