Shaan Shahid, with his outspoken nature, has once again expressed his views on Twitter and this time, he is targeting none other than the relationship shared by Asim Azhar and Hania Aamir.

Azhar recently opened up in an interview with BBC Asian Network, where he stated how he needed Aamir’s consent before he could confirm anything about their relationship status. His views were well-received all over social media, and their fans wished the best for them throughout.

Read: Asim Azhar finally spills the beans on his relationship with Hania Amir

However, Shaan pitched in with his advice for the couple after the BBC Asian Network shared the clip from the interview. He tweeted a picture which said “Seek respect, not attention. It lasts longer.”

When asked about it, Shaan elaborated his views and felt such a personal topic should not be discussed on a public platform.

Never brother I don’t need to …it’s just that it’s very personal to be discussing it on a public forum.. respect for your loved one comes first .. that’s all

Once again, the actor’s views did not go down well with the general public, and many felt that his opinion towards the couple was unsolicited.

And once Galaxy Lollywood posted the actor’s tweets, he tried to defend himself by saying the media uses attention seeking tactics like this, and that it should just seek respect instead. Moreover, he also added best wishes for the couple, mentioning how falling in love is a great feeling.

Looks like the actor bears no ill-will with his words, no matter how unsolicited they may be for the couple. Nonetheless, meddling in other people’s lives is still something the fans feel he should refrain from. Web Desk - December 28, 2020
0
Iqra Aziz and Yasir Hussain have often given couple goals by sharing their love for each other with their fans on social media. The celebrity... If script goes right, Vidya Balan might work in a Pakistani... 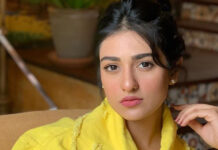