The Shaan-e-Pakistan Music Achievement Awards took place in Lahore on Friday, awarding young talent in all their respective fields. Among other interesting appearances including Xarb, Sounds of Kolachi, and KaraKoram, the band that really won hearts all over was Poor Rich Boy.

Winning the award for the Best Indie Track, the band’s frontman Umer Khan (Umer Duck) gave an acceptance speech where he shed light on the difficulties faced by minorities in the country.

“I have had the privilege to pursue my passion, and through that, express myself in a country where the majority are deprived of basic necessities and human rights,” he started off, further adding how their songs always drift away from mainstream topics.

“This is why when we’re writing lyrics for our songs, we never talk about partying or wealth and fame. Instead, we write of subjects that are closely connected to our society and the disparities within it,” he added.

He also mentioned the minorities with the examples of missing persons in Balochistan and other districts, as well as transgender people who are often disregarded in the society. Khan urged Pakistanis to remember them in every achievement.

“I believe that every Pakistani, in every achievement, however small, should remember those whose silent suffering has been ignored. Be they the missing Baloch or the missing Pashtun, the Gilgit-Baltistani or Siraiki. Be they the countless women of this country who have suffered every pain and torment imaginable or our trans people. And also the youth, from whom we expect a bright future but their past and present is darkened by our negligence,” he said.

“May Pakistan be a country where art is not for just a specific group and where we don’t have to host our award ceremonies in secrecy, that we can enjoy and celebrate these moments with the rest of our public,” he said, ending his speech and gaining respect all over the place, while setting a benchmark for other artists to highlight important issues of the society. Web Desk - December 3, 2021
0
Yasra Rizvi refuted all the rumors regarding her separation with husband Abdul Hadi and emphasized that putting pictures on social media is not compulsory. Taking... 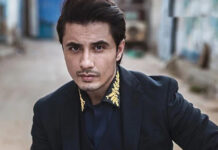