A Pakistani having the US citizenship has recently visited the ‘forbidden land’ of Israel and Palestine and shared experience on her Facebook. Her post, highlighting the historical sites of these lands, is breaking the internet these days. It is to remind the a Pakistani citizen cannot travel to Israel as it is forbidden on ‘green passport’ by the government of Pakistan.

“I had a dream of visiting ‘Jerusalem’ for as long as I can remember. I had inherited this love for #QiblaeAwwal and #Jerusalem from my parents especially my dad, who was an avid traveler and had a strong wish to visit Jerusalem but couldn’t; because he was a Pakistani passport holder,” wrote Madeeha Anwar Chaudhry

“When I came to US, I pledged to myself to visit this revered city as soon as I receive my blue passport. In December 2016, a few months after becoming US Citizen, I visited Israel and prayed at Masjid e Aqsa, Dome of the Rock (Qubbatussakhra), roamed freely in the old streets of Jerusalem, felt the auspicious history in the oldest cities known to human civilization; Bethlehem, Hebron (AlKhalil), DeadSea and Jericho (Ariha) and got a chance to interact with the locals be it Muslims, Christians or Jews; and found out everyone had their own stories yet very sacred, unique and holy connection to this land,” she expressed.

Talking about her experience, she wrote, “it was an amazing experience to be at a place which is so unfamiliar to us and where not many Pakistanis’ were able to set foot before. I’ve arranged a pictorial glimpse from my long-awaited journey to Israel with description of different Holy places and cities.”

“The Israeli West Bank barrier or wall is a separation barrier in the West Bank. #Israel considers it a security barrier against terrorism, while #Palestinecalls it a racial segregation or apartheid wall.”

It is believe that Nabi Younus AS had stayed at the place for sometime. 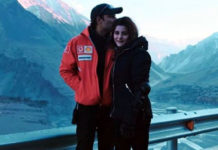