Yasir Hussain didn’t like Pakistani mobile phone brand making Esra Bilgic (Halima Sultan in Ertgrul Ghazi) their brand ambassador. He thinks that a local actress should have been there in place of a foreigner. In addition, the actor named Pakistani actresses who could have been in place of a foreigner. It must be noted here that Esra aka Halima Sultan gained fame in Pakistan through ‘Drilis: Ertugrul’. The Turkish actress was followed by Pakistanis after the drama serial on aired at Pakistan Television (PTV) on special directives of Prime Minister Imran Khan. Admin - June 20, 2019
0
Nadia Jamil recently made an appearance on Samina Peerzada's show Rewind With Samina, the episode of which is yet to be aired. However, Jamil... 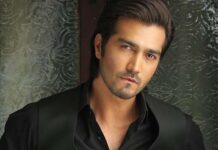