Looks like the LUX Style Awards won’t be controversy-free any time soon, as more nominees have taken a stand to reject their nominations. Following the footsteps of model Eman Suleman, who openly boycotted the ceremony and rejected her nomination, clothing brand Generation announced their decision to boycott the award show.

“Generation will not attend this year’s Lux Style Awards where the brand has been nominated for Achievement in Fashion Design (pret), due to the inclusion of a nominee that has been repeatedly accused of sexual misconduct by multiple women,” their press release stated.

They further expressed their support for victims of toxic misogyny, sexism, and harassment, and clarified that the decision was made in full consciousness.

“This decision has been made after serious deliberation and as both bodies do not hold anything against those who choose to attend the LSA this year, or bear any personal ill will towards anyone associated with the awards,” they added.

GENERATION will not attend this year’s Lux Style Awards where the brand has been nominated for Achievement in Fashion Design (pret), due to the inclusion of a nominee that has been repeatedly accused of sexual misconduct by multiple women.https://t.co/kPsYBzcbpl…

Similarly, singer Meesha Shafi also came forth and asked the LSA organizers to remove her nomination from Best Song category. Thanking Suleman, Generation, and Saima Bargfrede for paving the way, the singer mentioned her song and the bitter irony that came with being nominated for it.

“I want to thank Eman Suleman. What she, Generation and Saima Bargfrede have said and done is what I consider my award. In a perfect world, I would love to see women retain their space in the industry while being safe, so that the cost of speaking up is minimized, or even done away with altogether. A cost which is all too high at present. Our boycotts should not overshadow our achievements. With brave women like these, I feel optimistic about getting there one day,” she wrote.

“‘Mein’ stands nominated for the best song at the Lux Style Awards 2019. The irony is not lost on me given the current circumstances and I would kindly request that my name and work be removed from the list of nominees,” she added.

Following these recent developments, it was also pointed out LSA took a stand for the #MeToo movement last year, coining the term Mai Bhi, and stood in solidarity with victims of sexual misconduct and harassment. Celebrity makeup artist Omayr Waqar took to his Instagram to commend Suleman and the rest, while mentioning LSA’s hypocrisy.

“No offence to anyone but I feel when big platforms like LSA take a stand for something one year and then go against their words the next year makes it sounds like they don’t really care for the causes and just do things to get the attention and sympathy. And just to look good for the public with no real feelings,” he said.

Social media surely had a field day, as many took to Twitter to praise the brand and the women in question.

Brilliant move by Generation. P.s all those who are giving this a thumbsup on social media and yet attend the event should realise that they’re an equal part of the problem and their digi movement is of no real use tbh pic.twitter.com/LjgB9j4bfA

Now this is what is called integrity, and standing up for our sisters everywhere.

Those of you squawking "aurat aurat ki dushman hai" can all shut up and sit down. https://t.co/Y0v4dBdy7J

Oh my god. Yes @eman_anjum YOU DISRUPT THE SYSTEM https://t.co/lpvDzLszLq

@GENERATION_PK you’ve made a customer for life! Thank you, for standing up for women everywhere and believing their stories, and for standing up to big platforms celebrating harassers after claiming to be the supporting the #MeToo movement last year! Shame on @LuxStyleAwards! https://t.co/9CxmhBfNoA

Whereas, some felt the need for a boycott was unnecessary.

I don’t think @itsmeeshashafi should have boycotted the #LSA2019. Neither should anyone else. The awards are celebrating so many women who have not harassed anyone & women like her and Eman Suleman who are celebrated for THEIR craft. #TeefaInTrouble was Ali Zafar’s film +

Even though it was right to boycott in principle. It was HIS film. But #LSA2019 doesn’t belong to him. I understand the sentiment & the emotional quotient of wanting to boycott but this is not fair to women who DO want to be celebrated for their work. It’s not THEIR fault +

On the other hand, some pointed out how the case where it all stemmed from, when Shafi accused Ali Zafar of sexual harassment, was still in court and the boycott was uncalled for. With that said, LSA officials are yet to comment on the increasing controversies. With the way things are going, the turnout might turn out pretty interesting. Admin - April 16, 2018
0
Pakistan’s iconic couturier HSY marks his 24 years of fashion with a first of its kind solo show experience in his home city of... 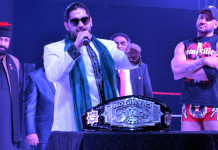