In a recent session held at the ZAB Media Festival, a bunch of actors and journalists enlightened the industry with their takes on harassment, the MeToo movement, and the apparent discrimination faced by women all over the country. Hareem Farooq, Mansha Pasha, and Osman Khalid Butt pitched in with their support for the cause in the hour-long session, and their thoughts [as reported by Dawn Images] are worth mentioning here.

With Mehwish Hayat receiving immense backlash over receiving the Tamgha-I-Imtiaz acting as a prime example of how the industry and society work, Farooq brought everyone’s attention to how a woman’s credibility is always questioned when she receives accolades as such, whereas a harasser is celebrated with no questions asked. “We’re living in a time where women receiving such prestigious awards are questioned but nobody stands up and questions when a harasser is getting awards,” she said.

“My biggest problem with Mehwish’s Tamgha-i-Imtiaz is, how can you question a woman for her achievements but not question a man when a woman says she’s harassed by him? Nobody talks about it, nobody questions it. I think Mehwish is a brilliant actress, she’s capable of competing on an international level and good for her for winning that award,” she explained.

“But why does nobody question any harasser who has been called out? Then item numbers should not be questioned either. Let’s not talk about objectifying women then because at the end of the day the woman will still be blamed,” she added.

Pasha also chimed in with how women are seldom celebrated for their achievements, and the society would rather pit them against each other instead of creating harmony. “There’s a certain demonization of women in Pakistan. They can do no right by people. Women are pitted against each other, it’s unfortunate and it benefits no one. Women are judged for everything except for their achievements, and that needs to stop now,” she said.

On a similar note, Butt shed light on the society’s intolerance towards women owning their sexuality, and how the cinema contributes to it. “As a society we completely repress a woman’s sexuality, her right to own her sexuality and yet in our cinema that’s what we love to parade. I am a dancer and I have been dancing since the age of four. I love both forms dancing on screens but it’s about the male gaze, how the camera zooms in and lowers to certain body parts,” he said.

He further brought up item songs and commercials, which he felt have become villainised in all aspects. “I don’t think a woman dancing is an item number, but a woman dancing to seductive lyrics [is something completely different]. I feel item numbers have become villainized, everything that happens – rape or domestic abuse – is being linked solely to item numbers, but product commercials also show women utterly and completely consumed by their appearance. That’s also a form of objectification,” he said.

Also read: Imran Kazmi teams up with Hareem and ARK for yet another project

On that note, Farooq pitched in with a question, asking the crowd if it would be called an item number if a man performs a solo dance, and was met with silence in return. All in all, the panel touched a lot of sensitive topics, which need to be highlighted as much as possible, especially with conspicuous examples of discrimination and indifference in front of us. Admin - June 8, 2019
0
Veena Malik is known to possess an outspoken temperament, especially on social media. And this time her reason for being one of the top... 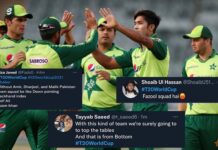