Bilal Ashraf, Gohar Rasheed, Urwa Hocane and Ghana Ali starrer Rangreza trailer was released last night in a star studded event, which also launched the music of the film. To be very honest, we weren’t expecting much but the trailer surely raised our hopes and we are now expecting much from the movie.

Rangreza is directed by the debutant Aamir Mohiuddin and written by Akhtar Qayyum while Usman Malkani has done the cinematography. The film earlier had Sana Javed but Urwa Hocane replaced her before it hit the floors. It also stars Alizey Gabol, Tanveer Jamal, Akber Subhani and Shahid Naqvi in supporting roles.

We caught team Rangreza at the trailer launch of their movie and asked what they had to say about their movie. Here’s what they said;

“It is a beautiful musical journey with lots of drama, action, love and a very strong social message. So, it’s a complete family entertainer. See you guys in cinemas on December 21st.”

Read: Gohar Rasheed to do an item number with transgenders in Rangreza

“The first male item number. We worked with 200 transgenders and it was a nice experience working with them.”

“It’s my debut film, which has been written by Akhtar Qayyum. We have put our hearts and worked real hard for this film.”

“We have high hopes from this film and let’s pray that it turns out to be a success.”

We also got a chance to talk to Janaan ladies, Armeena Rana Khan and Hania Amir, and here’s what they said about the film.

“We are really excited but it looks very colorful. We are hoping that this is going to take us to yet another step up.” Web Desk - June 3, 2020
0
Mehwish Hayat, who last year confirmed playing Benazir Bhutto in a biopic, said that there is a Non-disclosure agreement in place for this project. Speaking... 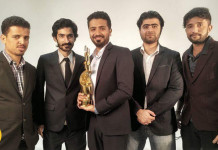