Hamza Ali Abbasi has been the ambassador of Pakistan Super League (PSL) franchise Peshawar Zalmi since the season one and this is the reason that his attachment with the team is only increasing day by day. He stays in ground to back his team for as long as he can.

In a recent interview during the match between Peshawar and Multan, Abbasi shared his memory of season one when his team couldn’t qualify for the final and told that he and now the captain of his team, Daren Sammy cried that day. “I cried in first PSL when we lost. We were right here and we had tears in our eyes, even Sammy cried.”

Peshawar Zalmi ambassadors Hamza Ali Abbasi and Mahira Khan are in the ground to back their team and seems like they are going to be the good luck charm! #MahiraKhan #HamzaAliAbbasi #PeshawarZalmi #HUMZalmi #HBLPSL #PSL2018 #PSL3 #PakistanSuperLeague #DilSeJaanLagaDe #BehtareenPK

He praised Sammy a lot for his dedication to his team and the league in overall. “The way he came to Pakistan last year when he had warning from his family. He was being told not to come but he was like I don’t care, I will go to Pakistan. Peshawar Zalmi bestowed honorary ‘Pathan’ citizenship to him and we call him Daren Sammy Khan Shinwari.”

The ambassador shared that his team has the reputation of having the very emotional fans. “You will not get to see this passion in any other team,” he claimed.

This year, Abbasi’s close friend and co-star in Maula Jutt 2, Mahira Khan has also joined Zalmi as the official ambassador. “I can’t tell you how excited I am about that. I hope it comes home. I hope more matches come to Pakistan,” she told. “Hassan is my favorite but I have heard that he is injured, so I am sad about that,” she added. ‘We have invited England for three T20Is’ Wasim Khan confirms 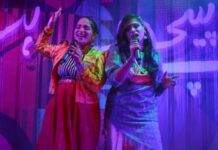