Sadaf Kanwal took out positives from the backlash she faced after getting married to Shahroz Sabzwari. She said all negative comments made her more strong.

“I have a very loving husband, In-laws, and friends, nothing else I want in my life. I don’t know why people talked so much negative about us but, to be honest, that backlash made us stronger,” said Sadaf.

On the other hand, Shahroz also talked about the immense criticism they faced after getting married. “We had the support of our loved ones which kept us strong throughout the whole period. Sadaf is a very strong girl and she knows very well how to tackle such situations,” he maintained.

It must be noted here that Shahroz tied the knot with Sadaf after getting divorced with his first wife Syra Yousuf in 2019. Their marriage became talk of the town as people highly criticized the couple for ruining a life. 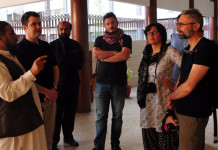