Even with Yasir Hussain and Iqra Aziz stealing the spotlight, the LUX Style Awards 2019 had a lot more to offer. Many artists bagged awards for their contributions to the industry, including Fahad Mustafa. The actor won the Best Actor – Critics Choice award for his film Load Wedding, and left everyone surprised as he himself was expecting one in the Viewers Choice category which was bagged by Ali Zafar for Teefa In Trouble.

While receiving the award from Mawra Hocane, the actor even jokingly confirmed if the award was Critics Choice and not the other. But nevertheless, he appeared extremely grateful to have won the award and dedicated it to a special person.

“Load Wedding was very close to my heart. We heard a lot of things for it, they even said [things like] I’m a Sindhi playing the role of a Punjabi, who’s going to watch that? But jury, thank you so much,” he exclaimed. He further thanked the film’s director Nabeel Qureshi, saying “an actor without his director is nothing.”

READ: The ghairat brigade having a field day over Yasir-Iqra proposal

“Today people refer to me as a superstar and a great actor, I am quite popular, but there has been a director who supported me at the time – Syed Atif Hussain – and who used to tell me I would become a film actor someday,” he added, urging everyone to pay respects to the late director with a standing ovation. 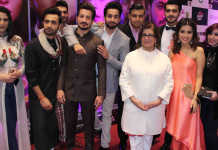