Faisal Qureshi believes that female actors struck into more responsibilities after getting married and it often affect their work.

Speaking to BBC Urdu, Faisal shared his opinion on why good female actors often disappear from screens after marriage.

“I think female actors struck into more responsibilities than male actors after marriage. Because, they have to manage both home and work. So, they often disappear from screen and settle down at one place,” he said.

“I worked with Sunita Marshall after her marriage. She used to be worried about her kids every time, same was with Shaista Lodhi. So, its difficult for female actors to manage things after marriage,” he added.

In continuation, Faisal gave example of Iqra Aziz who disappeared from tv screens after having her first child. “See, Iqra is a wonderful actor but after having a kid, she reduced her work. Whereas, Yasir is doing project after project. I talked to Iqra about this and she said ‘I need to look after the baby’,” Faisal shared. Web Desk - May 6, 2021
0
Nadia Jamil expressed disappointment over yet another rape incident that took place with a 10-year-old little girl in Karachi's area of Essa Nagri. The veteran actor... 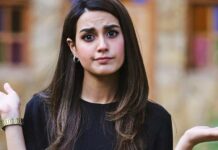