Veteran actor Sakina Samo thinks that Fawad Khan looks more similar to Dr. Hasnat and he would have been a better option than Humayun Saeed to play his character in Netflix’s original ‘The Crown‘.

Sakina took to Twitter to oppose the casting of Humayun who has become first-ever Pakistani actor to make his debut in the Netflix original.

“Does he even look like Dr. Hasnat?” the actress questioned in a tweet that was deleted later on. “Fawad Khan would have been perfect cardiologist. How could you not select him?” she added. While replying to a Twitter user, Sakina refused to give credit of Humayun’s casting to Jemima Goldsmith who was earlier a part of this series. She also wrote in a deleted tweet, “I will not be watching it.”

Oh well, I don’t think any credit goes to her – they must have done auditions at least 4 other Pakistani actors too for this particular character. That’s the normal audition process. Her own film based on a Pakistani family Shabana Azmi was selected… so there you go.

It is pertinent to mention here that Humayun’s casting as Dr. Hasnat in The Crown was celebrated across Pakistan. Fellow actors and Pakistanis congratulated Humayun for getting this role. Admin - July 10, 2019
0
Now that the hype over the LSAs is dying down, we finally have something else to look forward to! The All Pakistan Restaurant Association... 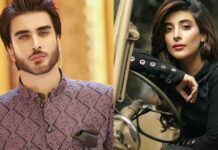