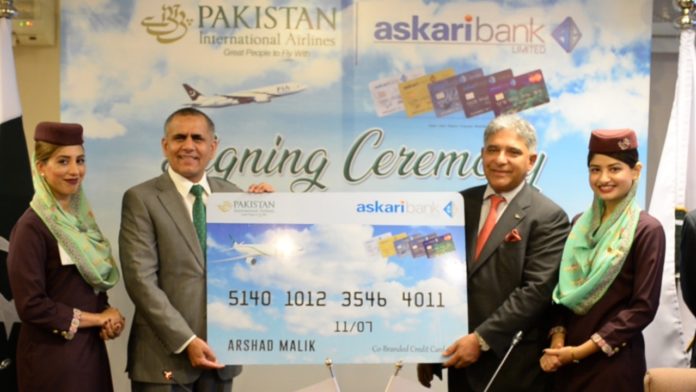 Pakistan International Airlines (PIA) and Askari Bank Limited have joined forces in order to launch a co-branded credit card where both organizations will be offering their services for the benefit of a large number of customers in Pakistan.

The signing ceremony was held at the airline’s Head Office where the MoU was signed by Air Marshal Arshad Malik – CEO PIA, and Mr. Abid Sattar – President & CEO Askari Bank.

As per the agreement, PIA and AKBL will launch a Co-Branded Loyalty Program which will be integrated with PIA Awards +Plus Frequent Flyer Program. And more importantly, the Co-Branded Credit Card will offer exciting benefits for PIA and AKBL customers.

As we talked to Mr. Ali Tahir Qasim, Chief Commercial Officer of PIA, it became apparent that the sole purpose of this alliance was to offer added value to the customer through their product, and to switch the focus revenue to profitability.

We are excited to announce that PIA and Askari Bank signing ceremony of a Co-Branded Loyalty Program was held today. The…

Posted by Pakistan International Airlines on Friday, 24 May 2019

“The focus is not only on the revenue, but it is also on profitability. In every day and every route, we work on the monthly and daily character strategies. All in all, we are revamping all our aircrafts, our full fleet will be coming into operation by tonight, the Hajj operation will be on, and we will be doing with our own fleet, not leasing,” he said.

He went on to emphasise how important it is to build proper airway channels from Sialkot. “We are now starting London-Sialkot to counter British Airways, because Sialkot is in close proximity with Mirpur and Khariyan rather than Islamabad Airport. We have given it a different flavour,” he said.

“We have started Sialkot-Barcelona before, and it was a great success. We have started Tokyo again. We had to close that because they were very unfair, but we took up with the Japanese government. They listened and they have increased our quota to 4000 passengers. So, we are expanding,” he added.

When asked how the government was cooperating in this venture, the CCO was all praises. “Believe me, there is great support. I’ve been in this industry for 30 years and in the past, the aviation policy was very unfair. We gave two platters of traffic rights to the Gulf carriers and other countries,” he said.

“We are now negotiating with every country, based upon the commercial strength and merit. For the first time, I very strongly believe the government is strongly standing behind us,” he added.

Following suit, Head of Consumer Banking Mr. Syed Taha Afzal also emphasised on the main aim behind the alliance, which was to provide their customers with utmost convenience. “The main objective of this alliance is basically to provide value to the customers. If you look back four-five years back, you will see that there is a lot of focus on travelling. And people really want to see value addition when they’re travelling,” he said.

“With this alliance, giving the credit card to the customer will only lead to revenue increment for them. Most importantly, the customers will get their value,” he added, mentioning rewards like free leg space, free tickets, etc.

Mr. Afzal also brought up statistics, according to which this alliance is nothing but profitable and natural for both firms. “We have 1.7 million customers, out of which 70 thousand are credit card customers, so an alliance with Askari is natural. And from the last year, our growth is 300-400%. Our profitability is 25-26% better than the first quarter,” he said.

“So our focus is to expand the consumer business. We have a lot of faith in PIA, and frankly, the kind of transformation I’ve seen in the last couple of months, it gives us more confidence,” he added.

Furthermore, as far as customer feedback is concerned, all the required steps are being taken to ensure a satisfying service. “As of right now, we are continuously taking feedback. Every time when we have a dissatisfied customer, through social media or different channels, we try to resolve it. We try to fix the complaint as soon as possible so that other customers don’t face it as well,” he said.